Why Nigerians are muting their mothers on WhatsApp 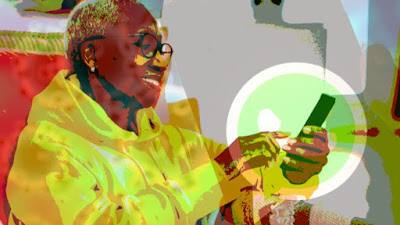 In our series of letters from African writers, Nigerian novelist Adaobi Tricia Nwaubani says children are now having to police their credulous parents on WhatsApp.

Just a few years ago, local comedians had a field day with jokes about elderly Nigerian mothers and their nonchalant attitudes towards their mobile phones.

They needed their children's assistance to type and send text messages or log in to their accounts and read emails.

And their frequent excuse for missed calls was: "My phone was in my handbag."

These days, the jokes have upgraded to Nigerian mothers and their infatuation with WhatsApp, the most popular messaging app in Africa.

Nigerian comedians like Maraji have been making skits about them.

"My mother spends her entire morning on WhatsApp," 39-year-old Udo, whose home is in Lagos, told me.

"Throughout while she's having her breakfast and drinking her tea, she's checking people's status updates and watching videos."
'Relevant messages'

Unlike Twitter and Instagram, WhatsApp can work even when internet connections are iffy, as is often the case in many parts of Nigeria.

And it requires no profiles or passwords, so the generation that mostly retired from active life before access to the internet became common in Nigeria finds it easy to use. In fact, it is their internet.

A common complaint among younger Nigerians is the number and nature of WhatsApp messages they receive from their mothers.

"You just wake up in the morning and you see 10 videos from your mother," 41-year-old Ihuoma, who lives in Nigeria's capital, Abuja, told me.

"And each one begins with: 'You must watch this!' 'This will help somebody!' Those are always the opening lines."

Her 76-year-old mother, Patty, told me that all the messages she forwards are "relevant".

"I don't send frivolous messages at all," she said.

"Why I send those things to my children, it is a form of education, lifting up of minds, sharing knowledge, experiences. I consider it a sort of fellowship, sharing with my children."

Ihuoma has since muted her mother's WhatsApp account and rarely opens her messages.

For many Nigerian mothers, the ability to broadcast ready-made messages via WhatsApp is like a superpower.

It enables them to transmit unsolicited prayers, advice and opinions.

One woman who complained on Twitter about her mother putting onions in the corner of every room in the house - touted on WhatsApp as a way to absorb toxins - received replies saying their mothers had also followed the erroneous advice.

"In our family group, my mother was always forwarding me and my siblings different health suggestions, concoctions to mix and drink," said Udo.

"When I pointed out to her that some of them are questionable, she replied: 'You never know, just try it and see.'"

Her mother also forwarded gory videos of kidnap victims and crime scenes, insisting that her children needed to see these to be aware and beware.

"That's when I left the family group and felt I could not do this any more," Udo said.

"My brother blocked her, which hurt her a lot. But she wouldn't listen. She keeps forwarding."
Thongs, cancer and other fanciful warnings

A number of people told me that they also had blocked their mothers on WhatsApp but did not want to let them know.

"I was once involved in an online debate about this," Ihuoma said.

"Some people were of the opinion that they wanted to block their mothers but couldn't get themselves to do that to someone who had carried them in the womb for nine months."

They were tired of the advice and cautions, mostly from conservative or religious mothers who have always had a problem with their more liberal-minded children's lifestyles.

Warnings, for example, signed by unknown medical experts, explaining how wearing thongs can cause cancer and how tight skirts can lead to heart attacks.

And of the most implausible stories:

. People told me of their mothers who are convinced that Nigerian President Muhammadu Buhari died long ago and had since been replaced by a body double from Sudan, known as "Jubril".

. That Russian President Vladimir Putin sent a lion into the streets of Moscow to prevent people from flouting the coronavirus lockdowns.

. That Queen Elizabeth has been pictured around the UK wearing face masks that are the same bright colours as her clothes, shoes and handbags.

All stories accompanied by videos and photos.

Affordable internet access became common in Nigeria just a few years ago, so this generation of elderly Nigerians was hardly exposed to the wonders of Photoshop and the ingenuity of idle minds that invent stories just for fun and clicks.

And so, they tend to believe most information they come across, especially when there is visual "evidence".

"My mother sent me and my siblings a video of a dragon-like creature fleeing towards the sky," said 40-year-old Grace, who lives in Lagos.

"She said we should see, that coronavirus was finally leaving the earth."

Grace was shocked that her well-educated, 76-year-old mother could actually believe that the coronavirus was captured on camera, finally fleeing the Chinese city of Wuhan through the clouds and into the sky.

"She asked me how I knew that it wasn't true and I said: 'Mummy, the coronavirus is not a flying reptile!'

"She acknowledged that I was right and we just kind of laughed over it."

Hardly any of the ongoing efforts here to combat fake news and improve digital literacy focus on older Nigerians - and so the burden must continue to rest on younger family members like Grace to correct and enlighten their parents.

But, sometimes, even this is impossible.