This agricultural enterprise is helping Nigerian farmers expand their business 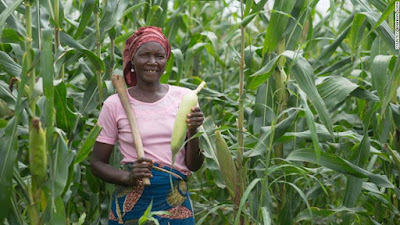 In 2015, farmer Sule Yohana joined Babban Gona, a social enterprise organization with a focus on providing expansion services to smallholder farmers in Nigeria.

Yohana, whose farm is in Kaduna state in northern Nigeria, told CNN that since he joined the enterprise as a member he has been able to grow his maize farm from two hectares of land to four.
A hectare of farmland is about the size of the average football field.

"They (Babban Gona) taught me how to farm better, they taught me the best way to store my maize and they supplied me with fertilizers and pesticides," he said.

Farmers like Yohana make up one of the largest sectors of the Nigerian economy as agriculture contributes 21.9% of the country's overall gross domestic product, according to the National Bureau of Statistics.

Founder of Babban Gona, Kola Masha says the enterprise was established in 2012 to promote agriculture and reduce the rate of unemployment in the country.

Out of a population of 202 million people, 39 million in Nigeria were unemployed, according to a 2018 report by the NBS.

Masha told CNN that Babban Gona's objective is to bring down the unemployment numbers by expanding crop production in rural communities, thereby creating room for more jobs in the country.

"We set a goal for ourselves that we will create around 10 million jobs by 2030 ... We firmly believe that agriculture is Nigeria's job-creation engine because it is massive, labor-intensive, and has tremendous growth potential," he said.

Babban Gona, which specializes in supporting maize farming is present in six Nigerian states and has so far provided its 100,000 farmer members with different farming-related services to improve their business.

Investing in spaces to store maize ensures that farmers don't lose their produce and by extension, their income.

"We invested in over 60,000 tonnes of storage where the farmers can store their harvest," Masha said.

Babban Gona also trains all its farmer members on some of the best farming techniques to improve their production of maize.

The company has a large number of field agents across small communities in northern Nigeria. These agents specialize in teaching water retention, soil analysis, seed planting, and sustainable farming.

Once a farmer joins Babban Gona, he automatically becomes eligible for this training.
Masha says anybody can join as a farmer member and that some people apply to become a part of Babban Gona on their own.

"Our team is actively out there at the grassroots level engaging with tens of thousands of farmers to get them to join. So, it is really a community effort, going from village to village, sharing with people about the potential of how Babban Gona can help," he explained.

When a farmer indicates interest in joining, they are subjected to a psychometric test where they are evaluated based on their maize production skills, personality traits, job potential, and abilities.
Those who pass become member farmers.

Yohana, who has been a Babban Gona member for about five years says he has been able to increase his net income as a result of the incentives provided by the enterprise.

"You know I used to plant one maize seed per hole but during my training with Babban Gona, I was taught that I could plant more than one seed with appropriate spacing," he explained.
He said he used to harvest only 40 bags of maize during harvest season, but he now harvests up to 200 bags.

Farmer members like Yohana are offered access to credit for their business and information on the best ways to market and distribute their products, according to Babban Gona founder, Masha.
"We help them to start thinking about turning their farm into a large business, to start making the necessary investments that will make their farms profitable," he told CNN.

The farmers are charged a small margin for the different services provided to them.
And according to Masha, the social enterprise is funded by leading financial institutions and governments such as the Nigerian Sovereign Wealth Fund, the German government, the Entrepreneurial Development Bank, among others.

Through the funding received, Babban Gona has been able to provide credit facilities for 55,000 farmers and aims to reach a million more by 2025.