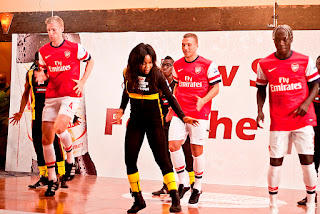 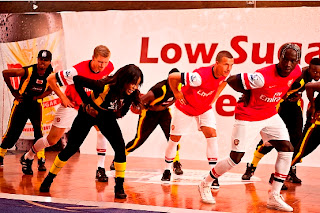 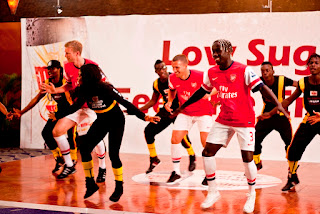 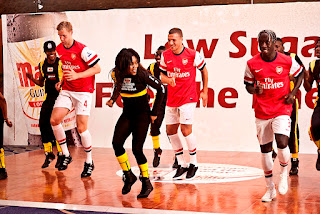 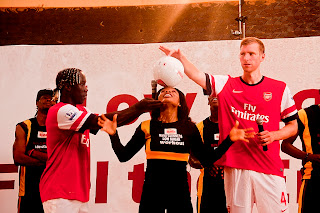 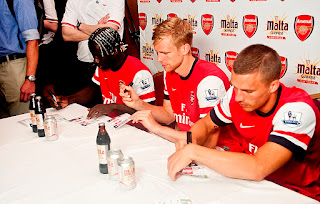 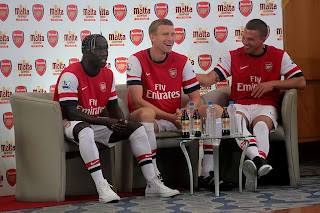 Arsenal fans in Lagos were treated to great dance steps by three of the clubs players, defender Bacary Sagna, Per Mertesacker and new signing Lukas Podolski on Sunday.


The players were in Lagos for the launch of the Malta Guinness Low Sugar Workout, which took place at the Ball Room of Eko Hotel. Gunners’ forward Tomas Rosicky missed the trip after he sustained an injury in a pre-season game.

The trio were put through their paces by Nigerian dance star Kaffi in the Malta Guinness Low Sugar Workout same time Arsenal were being held to a 2-2 draw by little-known Kitchee of Hong Kong.

“I am quite happy to be here (Nigeria); it’s a homecoming for me. I’m back to my roots because I am black and from Senegal,” Sagna said.

“Even if I am not Nigerian, we are all brothers; we are blacks. Hopefully I will be part of the team when they visit again next year.”

“I have only watched Kanu on TV and I believe he can be a role model to us at Arsenal. I played against a player like Chinedu Obasi in the Bundesliga; he is very technical, strong and quick,” he said.

Malta Guiness Head of Innovation, Sola Oke, said there were plans to bring the entire Gunners team to the country in future.

He said, “The rest of the squad are currently on pre-season tour; they all can’t be here at the same time. But sometime in the future, we will be bringing the team back to Nigeria again because of our partnership as the official malt drink of the club.”

The Malta Guinness Low Sugar workout tour will be coming to: