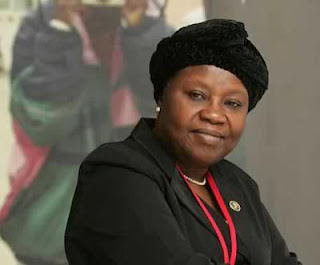 President Goodluck Ebele Jonathan Monday swore in the first female Chief Justice of Nigeria (CJN), Justice Maryam Aloma Mukhtar, and also conferred on her the national honour, Grand Commander of the Order of the Niger (GCON).

Describing the ceremony as "historic", the president advised the new CJN to acclimatise to her new portfolio so as to tackle the numerous challenges of reforming the Nigerian judiciary.

He called on her to adapt to the synergy already created with the judiciary and legislature by the presidency to tackle emerging national challenges like terrorism and corruption, adding that she must give attention to the thorny issue of the trial of corruption cases and terrorism by appointing special courts using her prerogative.

"Today we are witnesses to history with the swearing in of Justice Aloma Mukhtar as the first female CJN. I join millions of our country men, female and youth in congratulating the Nigerian judiciary and your lordship as we record this important milestone in the annals of our nation judicial history.

"Although this administration has remained focused in projecting women, the learned CJN achieved this outstanding feat on account of her brilliance, resilience and hard work," the president said.

He added that his administration would continue to accord excellence and give it its deserved place in the service of the country.

He recalled that the hand of destiny had played a big role in the life of the new CJN, stating that "her lordship has always been a trailblazer in her judicial journey.

"She was the first female lawyer of northern extraction, the first female high court judge from the North, first female second-in-command in the Kano State judiciary, and the first Nigerian female judge to be elevated to the Court of Appeal where she served for over 17 years

"Today, she has risen to the pinnacle of her judicial career as the first female CJN in further service of our great country. My lord, I congratulate you."

He added that Mukhtar's achievement is an inspiration to all citizens, especially womanhood not only in Nigeria but also in Africa and the rest of the world.

"The honourable CJN now joins an eminent and exclusive list of achievers recognised throughout the world as beacon of hope in this century. She will after leaving office become a member of our nation's highest advisory council, the Council of State. Here again, she will make history as the first female permanent member of that council.

"We are confident that this exceptional achievement will herald an era of institutional transformation in judicial activism and strengthen our socio-economic and political system," the president said.

He reminded the CJN that she was assuming office at a time when the nation is undergoing reforms in all critical areas of governance and that it is particularly gratifying that "Your Lordship pledged during her Senate confirmation hearing to pursue judicial reform.

"I am therefore confident that Your Lordship will quickly settle down to work and commence the urgent task of reforming and repositioning the judiciary for effective and efficient discharge of constitutional mandate.

"I have no doubt that your work at our nation's apex court will benefit from your essential character of integrity, humility and courage.

"Your lordship will preside over the judiciary at a time of profound changes that demand a united response. We believe that the judiciary can play a crucial role as we confront the critical challenges.

"We are dealing with security challenges occasioned by sporadic acts of terrorism in some parts of the country. The three arms of government must work together to overcome this terrorist threat and act in the country.

"The war against corruption is another endeavour that calls for concerted action by all arms of government. I am confident that the judiciary under your able leadership will rise up to the challenge and provide the most needed support for government to address these challenges.

"Our citizens have complained of delayed trials particularly in cases of corruption, terrorism and other matters of serious concern.

"These complaints have led to frequent calls for special courts or designation of special judges to handle them with the required experience and speed.

"It will be your prerogative to consider and decide on this call. But I am sure that the entire country is in agreement that justice delayed is justice denied."

The president assured Mukhtar of his administration's continued support and cooperation and commended the immediate past CJN, Justice Dahiru Musdapher, for his effort within the short period he was in office.

He said: "I will like to place on record our immense gratitude to the immediate past CJN, Justice Dahiru Musdapher. Despite his short tenure, he made spirited efforts to restore public confidence in our courts.

"We wish Justice Musdapher a well deserved retirement and hope that he will avail his wealth of experience in the continuous service of our nation especially as he is now a member of Council of State."

Speaking to reporters at the end of the ceremony, Justice Mukhtar re-iterated her earlier stand during her Senate screening that there was no need for a special court.

According to her, "I think I talked about that at the Senate that there is no need for a special court.

"A judge, two or three in the states can be designated to take care of that. I will again go back to what I said in the Senate, that I will lead by example and I will hope and pray that the others will follow."

On the nation's security challenges, she again repeated her presentation at the Senate screening, stating that the judiciary would partner the authorities to ensure that the menace is curbed.

In attendance at the swearing in was the First Lady of the country, Dame Patience Jonathan, who was accompanied by female ministers. This is the first time the First Lady would be attending a function of this nature.

The governors of Bayelsa and Kano States, Seriake Dickson and Rabi'u Musa Kwankwaso respectively, were among other dignitaries at the ceremony.