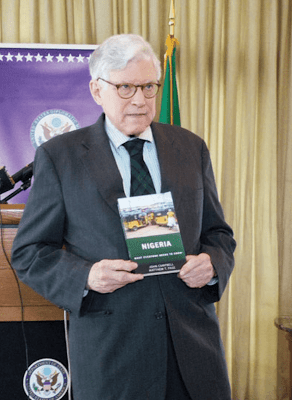 Former United States Ambassador to Nigeria, John Campbell, has recommended reformation of Nigeria’s military and other security agencies as solution to the country’s problem of insurgency and for her development.

Campbell made the recommendation recently when the United States Consulate General Lagos launched in his honor, a book titled: Nigeria: What Everyone Needs to Know which he co-authored with Matthew T. Page. Addressing the media at the Ikoyi residence of the Consul, Campbell said based on his observations, people he has talked to and NGOs’ submissions, the consensus is that Nigeria’s security service abuses is a driver of recruitment by Boko Haram.

Other recommendations made by the former envoy include infrastructure development and combating of corruption. Campbell also decried the electoral system and processes in Nigeria saying while the people of Nigeria spend long hours on queues in the hot sun trying to cast their votes in elections, voting is done in 10-15 minutes in the United States of America. Nigeria:

How did the slave trade impact on Nigeria’s development?

What will Nigeria’s economy look like in fifteen years?

What is a day in the life of a politician like?

Why has communal conflicts killed so many Nigerians?

Where is the Nigerian diaspora, and why is it so influential?

Will Nigeria’s oil run out, and if it does, what happens?

“Matthew and I each drafted the answer to 36 questions – and then we swapped drafts, questioning and editing each other’s work. Then we sent selected questions and answers to experts for feedback. We then put the book together. The questions are arranged chronologically – the book opens with questions related to Nigeria’s history – like the slave trade – and closes with questions related to Nigeria’s future. “But, our hope is that readers will use the table of contents to find the questions they are interested in at any particular moment. For example, under the question, How does Nigeria contribute to world culture? There is discussion of the domestic film industry – Nollywood -and also music,” Campbell said.

Regretting the state of perennial electric power failure in the country, Campbell queried where all the money spent on electricity in Nigeria since 1999 has gone to. “Corruption – private gain at the expense of the public – is widespread. Fourteen billion dollars has been spent on electricity since 1999 -where are the results?” The former envoy regretted that Americans do not pay sufficient attention to Nigeria.

Paying attention to Nigeria is important, said Campbell, because “what happens here (in Nigeria) directly impacts on the United States. Yet, I get frustrated that Americans do not pay sufficient attention to Africa in general or Nigeria specifically. The visit by the First lady, Melania Trump, is positive because many Americans will focus on Africa.

I do regret that she is not visiting Nigeria or South Africa, the continent’s countries of greatest strategic importance to the United States. For outsiders, Nigeria is a complicated place.” Narrating his itinerary and career in Nigeria, Campbell said: “I first went in 1988 from my post in Geneva. I set out to try to understand how Nigeria works. I have lived there more than seven years.

I was Political Counselor at the U.S. embassy, then in Lagos, from January 1988 to July 1990. I was responsible for political reporting during those years of military government. I returned to Nigeria as American ambassador in 2004. My tour ended in 2007.

During those two periods, I visited 35 of the 36 states. I was able to talk to everybody – from presidents to cardinals to chiefs to rag-pickers. I retired from the U.S. Department of State when my tour in Nigeria ended, in 2007. I was briefly recalled in 2008-09 by the Office of the Inspector-General to inspect our missions in Mexico and Iraq. Since then, I have had no formal ties to the U.S Government.

“I have also been able to look at Nigeria from an academic perspective: I was a fellow at the Woodrow Wilson School at Princeton University during the 1990-91 academic year and later a visiting professor at the University of Wisconsin, 2007-2008. I have been at the Council on Foreign Relations since 2009, working mostly on Nigeria and South Africa.

“I was asked by Oxford to do a book on Nigeria for its What everyone needs to know series. The series’ audience is primarily American, British, and other educated non-specialists around the world. The book might also be of particular interest to Nigerians, if for no other reason than how two foreign friends see the country.

The series avoids jargon and political science language. Academic apparatus – footnotes, etc. – are kept to a minimum. The former U.S ambassador then narrowed his discussion to the content of his new book. “I invited Matthew Page to be a co-author. He has had a long and distinguished career as an Africanist in various agencies of the U.S. Federal Government. His knowledge of Nigeria is exhaustive. “The book is divided into seven sections: History, Economics of Oil, Religion, Politics, Security Challenges, Nigeria and the World, and Nigeria of the Future.

“For each section, we developed questions. That meant trying to decide what “everyone needs to know.” What is the bottom line?”

What does everyone need to know?

First, the Challenges: Chinua Achebe said: “Whenever two Nigerians meet, their conversation will sooner or later slide into a litany of our national deficiencies.

The trouble with Nigeria has become the subject of our small talk in much the way the weather is for the English.” From our perspective, the general socio-economic challenges include the following:

There is over-reliance on subsistence agriculture and petty trading; the percentage of those living in poverty is increasing; climate change is having a serious impact on Nigeria: the Sahara is moving south, sea levels in the Gulf of Guinea are rising.

There is also a population explosion: In Zamfara, the statistically average woman has 8.1 births; in Rivers State, 3.8. Nigeria’s is a flawed democracy bedeviled by multiple insurgencies: Boko Haram. There is conflict in the Middle Belt over land and water use, often in an ethnic and religious context, and with criminal elements, i.e., cattle rustling.

Nigerians widely criticize their government for mismanagement; corruption is structural. The bottom line is this – most Nigerians must fend for themselves.

There is lack of infrastructure, and basic social services are inadequate, said Campbell. “Examples are in the fields of health/medicine, generation of electricity (the country generates about the same amount of electricity as Edinburgh).

“Nigerians show resolve, industriousness, and optimism about the future.

There is great capacity for peaceful co-existence and informal conflict resolution. A sense of national identity may have started to develop, and there is a popular commitment to democracy. This is clearly seen in the efforts Nigerians make to vote. “Press and media are largely free, and there is an entrepreneurial culture.

“Throughout our book, Matthew and I emphasize the optimism we have about Nigeria’s future by highlighting ways in which the country can unlock its great potential, whether by focusing on infrastructure development, combating corruption, reforming its military and opening up more opportunities for women to participate in politics, or in a host of other ways.

“In 1960 at independence, Nigerians expected that theirs would soon become a great power, giving Africans a seat at the highest international table. Maybe it is just going to take longer than they expected. Ambassador Campbell, the Ralph Bunche Senior Fellow for Africa policy studies at the Council on Foreign Relations, and Matthew T. Page, Associate Fellow in Chatham House’s Africa Program, in the book, provide a rich contemporary overview of Nigeria, delving into the country’s recent history, politics, culture, corruption, war against terrorism, and human rights issues. Chief Tat Osman of U.S. Consulate’s Political Section hosted the event celebrating the release of the new book.