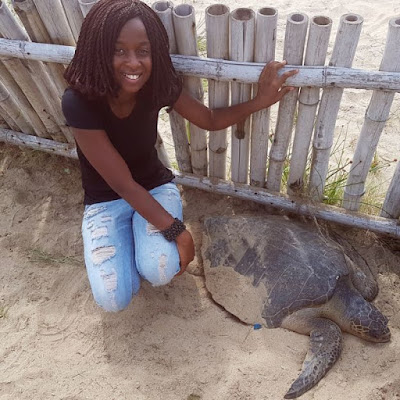 Doyinsola Ogunye, along with around 20 volunteer children, vigorously combs a sandy shore in the Nigerian coastal city of Lagos, unearthing deeply embedded litter and plastic that can prove deadly to sea turtles.

The tide is low and the layer of scattered debris across a seemingly endless stretch of golden sand emerges as the waves recede into the ocean.

Every type of man-made waste imaginable, from polystyrene, broken ceramic, assorted flip-flops and building materials, is visible. I can even spot a syringe.

This is Elegushi beach - and nothing can beat the beauty this strip of Atlantic coastline, but the sheer scale of litter hits you right away.

"Sometimes it gets very overwhelming," says Ms Ogunye, an environmental activist who has set up a programme to rid the beach of rubbish.

Every week she and her volunteer crew collect about 50 large sacks of litter.

It's a mammoth task, but the 30-year-old has put herself on the frontline, battling the destruction caused by pollution.

As well as cleaning the public beach, she plants trees and rescues endangered sea turtles.

Ms Ogunye founded the Kids' Beach Garden, a space stretching over seven hectares (17 acres) of land along the coast, where children come to learn about the environment.

As I watch the playful way Ms Ogunye interacts with the children, teaching them about marine life and recycling using sport, games, chants and songs, it's obvious why the children keep coming back.

Ms Ogunye believes change starts with the young. She credits a childhood spent outdoors in Lagos for her love of nature.

Although Ms Ogunye trained as a lawyer, she realised that she wanted to pass on her passion for the environment to the next generation.

She decided to set up a charity for that purpose seven years ago while she was studying. The Kids' Beach Garden grew out of that initial venture.

"Every time I wanted to have fresh air from studying, I would come to the beach and relax.

"I realised that the beach was very dirty. There was no way I would even be comfortable in a place like that."

Ms Ogunye decided to take action. She used her database from previous charity projects to sign up volunteers to clean the beach and sort the recyclable waste on a regular basis.

But it was not long before she realised that beach-cleaning and rescuing sea turtles would have to go hand in hand.

She found many of the reptiles washed up on the shore.

"Most of the time the turtles are disoriented, especially when they're caught in the garbage or caught in grass," Ms Ogunye explains.

"We tend to keep them in a very dark place and later on we release them."

Many of the baby sea turtles that hatch on the shore die because of the conditions of the beaches.

She says it is essential that people living in coastal communities are educated about the need to conserve the creatures.

According to the activist, fostering relationships with people in these neighbourhoods and involving them in the process plays a central role in the education process.

She says it is crucial to explain to communities, who mainly depend on fishing, what they stand to lose if sea turtles are wiped out.

"Jellyfish are toxic. If [we] have [too] much jellyfish in the ocean, we're going to have a reduced amount of fish and that will cause food shortages."

Before I leave her, she promises to call when she next releases a rescued turtle.

'Meat in the sea'

A few weeks later I get an urgent call from her asking me to meet her at the beach garden.

She has bought a sea turtle from a fisherman who, she had heard through social media, was attempting to sell it in a village for food.

Of course Ms Ogunye has other ideas, wanting to release it back into the ocean.

When I arrive I find her digging a ditch in the sand with the help of a few volunteers and the fisherman who sold her the turtle.

The turtle, which had been bleeding from the mouth earlier, is floundering in the sand in distress.

Ms Ogunye is trying to contact a marine biologist for advice, but the turtle dies later that evening.

The marine biologist explains the cause of death was internal bleeding and there was little they could have done to save it.

It is illegal to catch and sell sea turtles and if anyone is caught they will be fined and possibly jailed.

Despite this, selling the creatures can prove too much of a temptation for fishermen.

The fisherman in this instance boasts that he can make more than $200 (£126) for one turtle and refers to them as "meat in the sea".

Changing these attitudes can make her work feel like an uphill struggle, but Ms Ogunye says she will never give up.

"I call it a burden because it's all I think about sometimes," she says.

When I wake up in the morning, when I'm having my bath, I'm wondering how we can take care of the environment. It's so precious and so important to me.

"I want in my lifetime to see Nigerians and Africans taking care of the environment."