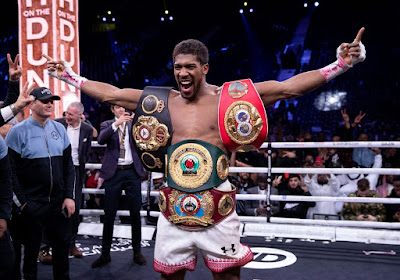 Anthony Joshua has expressed his desire to defend his heavyweight titles in Nigeria after reclaiming his world champion status in his rematch against Andy Ruiz Jr.

Since his victory over Ruiz, offers have flooded in for the Briton to stage future fights in numerous locations across the globe. Africa is amongst those to show interest in hosting Joshua, and the 30-year-old is keen to connect with his roots in Nigeria.

A fight in his parents’ home country would be the first world championship heavyweight fight outside of South Africa since Muhammad Ali and George Foreman participated in the ‘Rumble in the Jungle’ in Zaire.

“People were telling me I should go back [to Nigeria] for ages,” Joshua told reporters. “It was crazy because they don’t have 24-hour electricity but they still know me and support me.”

AJ told Pulse FM earlier in the year that he is “massively into Nigerian culture” which showed as he opted for the song ‘Water Get No Enemy’ by Nigerian legend Fela Kuti during his ring-walk on Saturday.

The comments should come with a pinch of salt, however. A day after his latest win Joshua was singing the praises of London and its fanbase, with Tottenham Hotspur’s new stadium mooted as a potential destination.

A return to London will likely be the next location for a match, but a visit to Nigeria to defend his titles is a firm ambition for Joshua.

“I went to the ghettos of the ghettos where it’s not all about egos and beef, it’s about people who are hungry to survive,” he reflected on his visit across the Mediterranean. “It was one of the best things I’ve done. Africa’s rooting for me for sure, so I would definitely love to fight out there.”

Joshua has two upcoming boxing commitments for 2020 – an International Boxing Federation (IBF) clash against Kubrat Pulev and a later World Boxing Organisation (WBO) fight which is likely to be against Oleksandr Usyk.

After working hard to snatch his titles back from Mexican underdog Ruiz, Joshua will need to defend his status from the Bulgarian and Ukrainian heavyweights.

“The plan is to maintain the belts, so we will have to have conversations this week with the IBF and the WBO to see who goes first,” AJ’s promoter Eddie Hearn told The Telegraph.

“It’s our understanding that the IBF mandatory comes first, which is Pulev, so realistically it is Pulev and then Usyk in that order, with Dereck Chisora fighting Usyk in February or March and then AJ fighting the winner.”

Joshua added: “I can’t get too caught up in the moment and have to stay focused on the task at hand, which is not staying undefeated any more, but staying champion for as long as possible.”