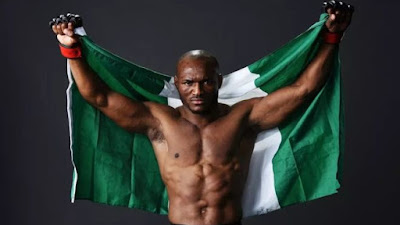 Nigerian-American mixed martial artist Kamaru Usman retained his UFC welterweight title in Las Vegas after a hard-fought win against US challenger Colby Covington on Sunday, December 15, knocking him out in the final stages of the fifth round.

The Nigerian, 32, broke Covington’s jaw with a huge punch in the third round.

But it wasn’t an easy victory for Usman as he and his challenger engaged in an all-out war for nearly five full rounds before the Nigerian Nightmare finished off his opponent in style.

After an early exchange of blows and kicks, the fight took a turn in favour of the champion in the third round after catching Covington with a strong blow that broke his jaw.

But the challenger relentlessly continued to fight on and looked like he could secure a win based on the judges’ decision. Covington before the fight had received a video message from the Trump family as they urged him to win the belt.

However, Usman had other plans as he dropped Covington twice in the final minute, then finished the fight with hammer fists on the mat.

He was cheered on by fellow Nigerian UFC middleweight champion Israel Adesanya as they both celebrated his victory together.

The victory means Usman has successfully defended his welterweight title for the first time in his career.

He won the title in Las Vegas when he defeated defending champion Tyron Woodley after five rounds to become the new champion.