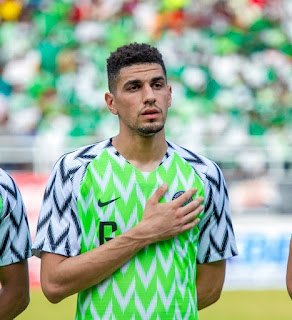 The 31-year-old Brighton defender also supports players walking off the pitch, but admitted it is only part of what needs to be done.

Balogun wants those not being targeted on the pitch to fully support their team-mates who feel that leaving the pitch is their only option, so that not too much pressure is put on the individuals.

"It's like they are afraid because the manager might say 'if you don't want to play, even though you might be an important player to us, we can replace you' and so that's something you will think about at least twice," Balogun told BBC Africa.

"That is what a team is supposed to be. We are a family. We are walking off [together], this would empower so many players who are racially abused because that way they then wouldn't feel alone."

Balogun says in order to get the message across, fans who do not take part in the abuse must also get involved in the battle against racism.

"You really take away what they love so much so that they understand we need to rethink here for a minute," he explained.

"So it will also affect people who are not involved in the racial abuse of the players.

"People who just happen to be in the stadium and they will be like 'wait a minute', those ones, let's call them idiots are taking away what we love, what we are passionate about."

A recent rise in incidents of racism across Europe has been met with financial penalties and partial stadium closures.

He is also adamant that the kind of sanctions being handed down are simply not having the necessary affect.

"At the point it's at right now I think you have to be extreme, even banning a team or like deducting points," he added.

"You probably have to go to a place they never expect, where you can actually hurt [punish] those involved in racist behaviour."

The Germany-born player has experienced racism first hand and points to one incident in 2018 when playing for Mainz and he was subjected to monkey chants from Hannover fans.

Balogun says authorities also have to make an example of the clubs when their supporters become involved in the racial abuse.

"When they are punished, clubs that are affected by the actions of their fans will have to do something about it," he added.

"They will have to find a solution. 'We are fighting for the championship here or we are fighting for relegation'. We need every point. So they can't allow or afford to lose points over something which is as stupid as racism."