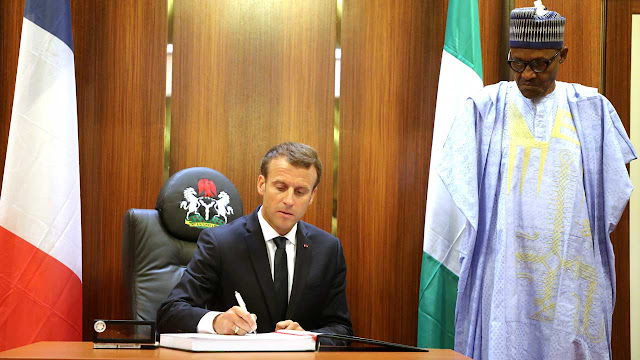 French Leader Emmanuel Macron yesterday met with President Muhammadu Buhari in Abuja, challenging him to work towards providing an enabling economic and political environment to help youths to achieve their dreams.He noted that it was important for leaders in Africa to understand why young people were disposed to joining terrorist groups.

“What we have to better understand is why many people are convinced to join these jihadists and these terrorists. That is why it is very important to build not just the security approach but also the stabilisation approach at the same time, to provide new opportunities.“Your governments will take care of you, I mean provide security and secondly, your governments can provide opportunities to you. And the best support is not to join crazy people and buy a bunch of guns and do crazy things,” Macron said.

At a joint press conference with Buhari after a closed-door bilateral meeting at the Presidential Villa, Macron pledged to increase the cooperation between Nigeria and France in tackling security challenges brought about by the activities of Boko Haram and ISIS jihadists in Nigeria and the Sahel region of Africa.“What is important to me is how the different African governments organise themselves to fight against terrorism and get rid of these people and especially, Jihadism. That’s is why I do promote the G5/Sahel Initiatives,” he said.

The French President noted: “First of all, I think the main plan is an African plan and France is not the one to solve or fix African situations. So, what we want to do is that we will intervene and maintain our presence in Africa and the Sahel, to fight against terrorism especially in Mali and in the region.”Both leaders signed agreements to facilitate French assistance totalling $475 million for some projects in Lagos, Kano and Ogun States. Specifically, the Lagos deal is a letter of intent for the financing of urban mobility improvement project via a loan of $200 million. This will involve the development of eight priority bus corridors connected to the Lagos mass transit network.

In Ogun State, a French firm in conjunction with the Nigeria Sovereign Investment Authority is to mobilise from investors about $200 million for land reclamation to correct the massive degradation of arable land being witnessed in the state.The project aims to reforest 108,000 hectares of depleting forest in Ogun, which the state governor, Ibikunle Amosun, hailed as very vital to not only addressing climate change challenges and recreating the forest, but also providing employment to the people of the state, among other benefits.

France, through its foreign development agency, Francaise de Development (AFD), will also extend a credit facility of $75 million towards improving water supply in Kano city.The concessional loan is expected to help the Kano government ensure more residents of the city have access to drinking water, while improving the financial viability of the state water board to increase its revenues.

Responding to questions on why he chose to visit the New Afrika Shrine of popular Afrobeat king, Fela Anikulapo Kuti, Macron said the place was an iconic hub.“First, because I wanted to find a good occasion to come back there. I know the place and I have some memories. I think that is such an iconic place for a lot of African people and African culture. Fela, Femi, Seun Kuti are obviously very famous in France and Europe. I mean they are big successes, but the Shrine is a cultural hub, an iconic hub. And it is very important for me, first on a personal level. That is why I want to say with a lot of humility that I recognise the importance of this place. I recognise the place of culture in this current environment.”

Lagos State governor, Akinwunmi Ambode, said the visit would signal the dawn of a new era between France and the state, especially for the myriads of talents that have made Lagos a home.During a special Afrobeat performance for Macron at the Shrine in Agidingbi, Ikeja, Ambode said: “It is with joy that I look forward to deep collaboration with France in our quest to make Lagos the culture and entertainment capital of Africa.”

He noted that the French Cultural Centre and Alliance Francaise have always been an asset to the cultural landscape of Lagos, saying: “I am glad that the French Cultural Centre will now have a befitting and hopefully a permanent home in the heart of our city.”Guests at the Shrine included former governor of Anambra State, Peter Obi, Senator Ben Murray Bruce and human rights lawyer, Femi Falana.

Falana said the visit showed that a king, referring to the late Fela, is not honoured in his own country.Commending Macron for promoting arts and culture, Falana urged Nigerian artistes and musicians to borrow a leaf from Fela by singing songs that mirror the society and call government to order.Femi Anikulapo Kuti, son of the musician, described the visit as an endorsement of what his father stood for while he lived.