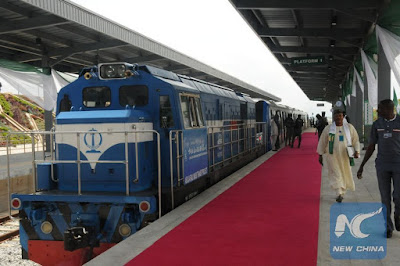 Nigeria on Thursday formally commissioned the China-assisted Abuja light rail transportation system, the first of its kind in West Africa.

Buhari, while delivering a keynote address at the light rail's commissioning ceremony, hailed the project as a significant milestone in the history of Nigeria.

"I am very optimistic that a modern rail service would bring about a boost to the FCT (Federal Capital Territory) economy and greatly enhance social life," said Buhari, who, thereafter, took a ride on the train.

Local passengers will enjoy a free ride on the train for one month, starting from Friday, said Kong Tao, an operations manager of the CCECC.

Kong said the three available coaches can convey more than 300 passengers on a trip, while at least 1,000 people are expected to daily ride on the train.

With a total length of 45 kilometers, the newly completed Lot A1 and Lot 3 of the light rail are part of the Abuja rail mass transit project.

The light rail was designed to have an interface with the national line at two points, where there would be interchanges to join the rail line linking the northern part of Nigeria.

The commissioning was preceded by a three-month test run, during which residents of Abuja beheld the new addition to the country's transportation infrastructure.

Buhari, together with key cabinet members and officials of the Federal Capital Territory Administration, flagged off the light rail transportation from the Abuja Metro Station, located behind the Abuja World Trade Center still under construction in the city center.

The president and co-passengers, including Zhou Pingjian, the Chinese ambassador in Nigeria, rode on the train to the Abuja Airport Terminal at the capital city's Nnamdi Azikwe International Airport.

Forty-year-old Chima Paul, who drove Buhari and others, told Xinhua it was a rare privilege for him to convey the country's very important personalities on his train.

"Apart from that, I am happier because this light rail system is a historic feat happening in my lifetime," said Paul.

"I've been driving the train for about three years now after learning from the Chinese. With this now, I can support my family and build a new career for myself," said the father of three.

Paul said the Abuja light rail is expected to reduce vehicular traffic and accidents, ensures the durability of the roads and makes transportation of goods, services and people a lot easier.

Nigerians had long anticipated the use of this facility, said Daniel Obot, a local civil servant.

According to him, the local transportation experience in the city of Abuja, the political capital of Nigeria, may never be the same as the train service cuts down travel time and cost.

Abuja, with a population of 4 million, is a relatively new city in Nigeria, but one of the fastest developing cities in Africa.

The construction of the light rail and its use is expected to open up new towns and boost economic activities along the corridor of Gwagwa, Kalgoni, DeiDei, Kubwa, Kokoaba, Dasonga, Asa, among 12 satellite towns in the Nigerian capital city.

For now, only three sets of standard coaches have been provided to cover skeletal services as the main set of the rolling stock is being awaited to make operations cover more passengers.

Sunny Moniedafe, a Nigerian education administrator, described his first ride on the train as "comfortable."

"I am seated as if I'm in my parlor and it is moving. Truly, this is commendable. I can see that the journey between the airport and the main city has reduced drastically and it is very comfortable," Moniedafe said.

"It is a very good thing. I commend the Chinese government for the relationship with the Nigerian government to make things better for us," he added.