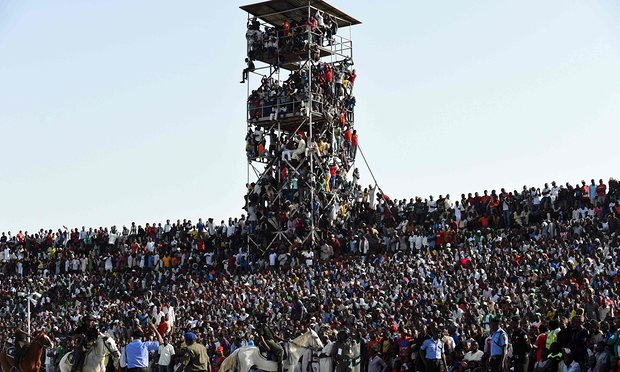 A major disaster was avoided on Friday as an estimated 40,000 supporters packed into the Ahmadu Bello Stadium in Kaduna to watch Nigeria’s 1-1 draw with Egypt.

Listed as a 16,000 capacity venue, the stadium in the north west of the country was subject to a heavy military presence after a pitch invasion marred the last international there in June.

But a decision by the Kaduna State government to open the gates to fans to attend the crucial 2017 Africa Cup of Nations qualifier for free created a frenzied atmosphere.

Hours before kick-off supporters started arriving, with some scaling fences to find their way in. Some were even pictured clambering up floodlight scaffolding to gain a vantage point.

“I felt the game was not going to take place because I thought the number of people on the pitch side was going to cause encroachment,” Rotimi Akindele, a reporter for Beat FM, told Goal.com.

In the end the match passed without major incident off the pitch, although Nigeria’s captain, John Obi Mikel, accused Egypt’s players of “cheating” after Mohamed Salah’s late equaliser kept the Pharaohs on top of Group G.

Oghenekaro Etebo had put the Super Eagles in front on the hour and looked like claiming a crucial win as the match entered the dying minutes. But with Godfrey Oboabona having limped off injured, Egypt’s players refused to kick the ball out and Salah was able to score after being played in by Ramadan Sobhy.

“I think we played very well but we lost a lot of chances that we created that could have fetched us total victory in today’s match against Egypt,” Mikel said.

“OK, you can say we should have concentrated a little more but Fair Play is Fair Play. This is cheating, that is all I can say. It happens in Egypt, it happens everywhere. It doesn’t matter how many minutes it is, you have to allow it. It is the referee that controls the game.”

The Arsenal youngster Alex Iwobi was brought on as a late substitute by the Nigeria coach, Samson Siasia – an appearance that means he can no longer represent England on the international stage.

Elsewhere there were victories for Tunisia, Mali and Ivory Coast over Togo, Equatorial Guinea and Sudan respectively, while Leicester’s Riyad Mahrez started for Algeria as they thrashed Ethiopia 7-1 in Blida.