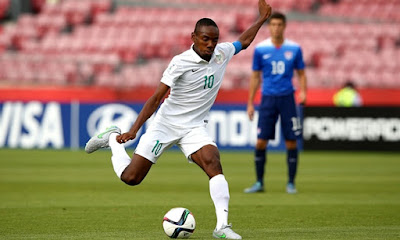 Nigerian midfielder Kelechi Nwakali has signed a deal to join Arsenal on a five-year contract this summer, sources have told ESPN FC.

Arsenal have been in advanced talks with Nwakali and fellow Nigerian teenager Samuel Chukwueze since January, with both players helping Golden Eaglets win last year's FIFA Under-17 World Cup.

AllNigeriaSoccer reported that Nwakali told them on Thursday that he had put pen to paper, but the midfielder claimed he had not said those quotes. "I've seen it [the report]. I am surprised about it because I did not speak to anybody. I never said anything like that," he told ESPN FC.

Sources told ESPN FC that the deal is done, but that there are still some complications to be ironed out which is why the deal has not been announced.

The Gunners will reportedly pay a transfer fee of about £2.5 million to the Diamond Football Academy as part of the deal and Nwakali will join when he turns 18 in June.

Nwakali has an older brother, Chidiebere, who is part of Manchester City's academy, but has previously said he admired Arsenal's track record of giving young players the chance to play first-team football.

The midfielder was voted the Most Valuable Player of the U17 World Cup, where he caught the eye of many European clubs -- including Arsenal.

"We identified Nwakali as the player of the tournament, basically, and as a top player," Gunners boss Arsene Wenger said in January.

Nwakali was pictured with Wenger and former Arsenal and Nigeria striker Nwankwo Kanu during his visit to the Emirates in January. Wenger said at the time that the talks to sign Nwakali and Chukwueze were "progressing well" but that they would remain in Nigeria until they turn 18.

Nigeria international Alex Iwobi, who joined Arsenal's youth setup at the age of eight, was also recently promoted to the club's first-team and has played a part in the club's FA Cup campaign this season.